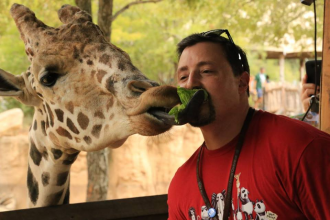 Dr. Hannon is a 1993 graduate of the Auburn University College of Veterinary Medicine, and is board-certified in avian medicine and surgery by the American Board of Veterinary Practitioners since 2008. He has been practicing avian, exotic, zoo, and small animal medicine in the greater Memphis, TN area for the past 26 years.

Although he is currently working in small animal/exotics practice, he has served as the primary veterinarian for several zoological collections throughout his career. These include the Tennessee Safari Park, the Tupelo Buffalo Park, the Mid-South Raptor Center, the Mobile Ark/Ark R.A.I.N., the Exotic Animal Rescue League, and Lichterman Nature Center, as well as some consulting with the Memphis Zoo.

He has extensive experience working not only with birds, reptiles, and exotic companion mammals, but he has also worked extensively with primates and prosimians, exotic canids and felids, macropods and other marsupials, ungulates (including antelope, deer, bovids, old and new world camelids, giraffe, zebra, and a myriad of farm animals), poultry, waterfowl, ratites, crocodilians, fish, invertebrates, and a variety of other exotic species, such as sloths, binturongs, civets, tamandua, and the like. He is a past president of the Association of Reptilian and Amphibian Veterinarians and is currently the president-elect of the Association of Exotic Mammal Veterinarians.

In his spare time, he enjoys fitness kickboxing, ballroom dancing with his wife Tracy, gaming with his son Jared, and visiting his daughter Devyn at the University of Georgia to watch her dance performances. He currently has three dogs: Apple, a puggle; Squirt, a pugweenie; and Tink, a boxer. He is well traveled, but this will be his first trip to Australia.