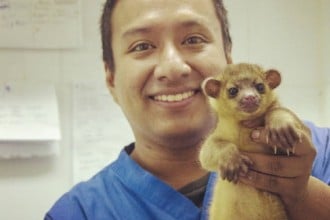 Dr. Reyes is the Medical Director of Centro Veterinario Panamá in Panama City, which sees and treats a range of animals – from companion pets to exotic animals and wildlife. Dr. Reyes is also the consulting veterinarian for APPC Panama, the Pan-American Conservation Association, which is Panama’s leading wildlife rescue organization. Since 2005, the APPC has rescued, rehabilitated, and released more than 5,000 wild animals – including kinkajous, jaguars, porcupines, margays, toucans, monkeys, anteaters, and sloths. With deforestation, over-development, poaching, and the illegal pet trade being some of the biggest threats to wildlife in Panama, the APPC is dedicated to saving the region’s most vulnerable species.