This two-week program put you alongside elephant veterinarians dedicated to teaching you a wealth of knowledge and unique skills while helping animals in need. The full two weeks of the program take place at an elephant sanctuary where you will work with elephant vets to provide medical care to the pachyderms and complete an elephant care course. 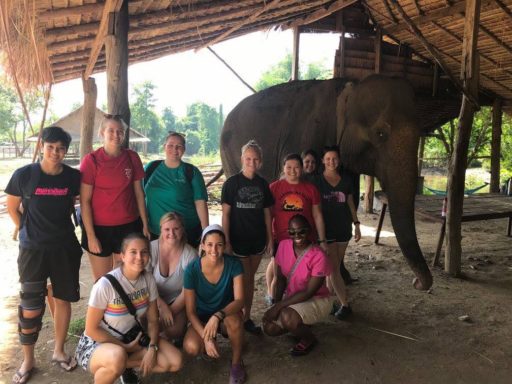 Students currently enrolled at Ross University School of Veterinary Medicine. This program is not affiliated with, sponsored by, or in any way connected to Ross University.

Each program date can accommodate a maximum of 12 students. Places will be held on a first-come, first-served basis.

Places are held without deposit until December 1. After December 1, we will accept waitlist students for any spaces for which deposits have not been paid.

These small groups allow you to learn directly from your veterinarian and have more hands-on elephant interactions.

• Work in a small group with an elephant vet 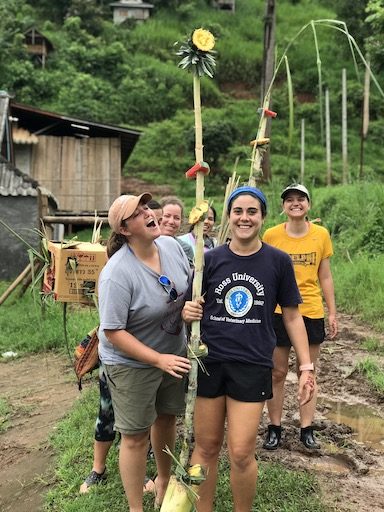 • Learn the history of Asian elephants and various management and training methods
• Learn and assist in elephant medical care including diagnostics, treatments, and preventative medicine
•Guided tour of Chiang Mai, including night markets and the stunning golden spires of the mountaintop temple

*Subject to 1 days +/- on the schedule, includes travel days.
*Dates indicate departure from and return to New York. Some flights depart early in the morning and may require students to arrive in New York the night before. Loop Abroad reserves the right to cancel any program at any time; in case of such cancellation by Loop Abroad, all payments will be returned in full. 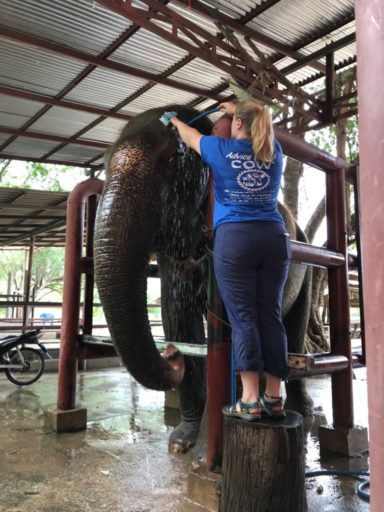 $2,900 USD not including international airfare. This represents a 25% discount on our regular enrollment programs. Tuition is all-inclusive (including housing, meals, activities and transport) during the program. Pickup and drop-off are at the international airport in Chiang Mai, Thailand.

Not Included: Airfare to and from Chiang Mai, any independent travel before or after the program, non-water beverages and snacks. Please note that to arrive in Thailand for group pick-up on the posted day, you need to depart the US 1 or 2 days prior. For each program, we will pickup at the Chiang Mai international airport on Sunday at the start of the program and drop-off on Friday at the end of the program.

Please note that “private” means all the students in your group will be in the same group for activities, and there will not be students from other schools included in your group. However, it doesn’t mean your group are the only students on the project or in your housing.

We’re extremely excited to show you what Thailand has to offer!

Chiang Mai is a city of contradictions and surprises. The old city walls and brick Buddhist stupas speak to the city’s 700-year history as the center of the Lanna Kingdom. 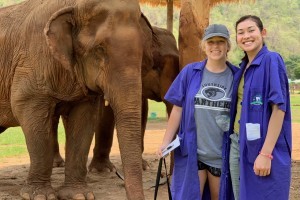 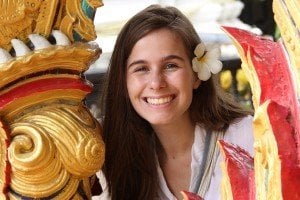 From papaya salad to coconut curry, from elephants to gibbons, from bamboo huts to bustling cafes, Thailand is a whole new world to explore. 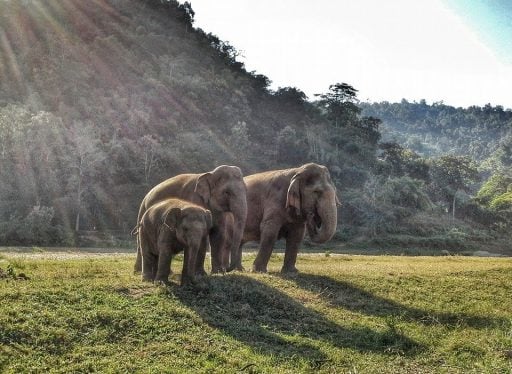 Monday to Friday, your group will work with your US and Thai elephant veterinarians to provide medical care to the elephants at the sanctuary. Your group may assist with a small amount of husbandry chores if needed, but most of your day will be spent learning about elephants, observing elephants with your vet, and providing hands-on upkeep and medical care to the elephants on the property. Every day will have a lecture-style component as well as hands-on learning labs and other opportunities.

There are 20-30 elephants living at the sanctuary who need care, maintenance, and daily upkeep, as well as occasional medical intervention. 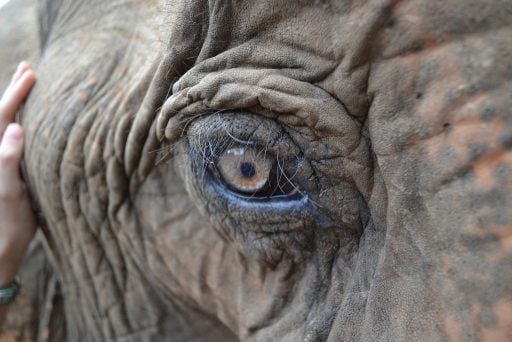 Though you will learn about elephants’ diet, enrichment, and upkeep, this is not a husbandry program. We will focus on providing you with hands-on and learning experiences that cannot be had elsewhere from experts in elephant medicine.

During the time on-site at the sanctuary, housing and meals are simple. Rooms may be shared (by students of the same gender) and meals are family-style Thai food. Cold running water is available.

On the middle Friday of the program, we will take a one-day break to explore and relax in Chiang Mai, our favorite city in Thailand. On Saturday, we’ll go as a group on a guided tour of the local markets, ancient city walls, and sparkling temples that make this our staff’s favorite. We will return to the sanctuary Saturday evening.

At the end of the program on the final Friday, we will depart the sanctuary for Chiang Mai city in the late morning.

You’ll notice that elephant riding is not included in this itinerary. Learn about why we don’t ride elephants.

Every program begins with a safety orientation. We’ll discuss how to stay safe and healthy during your time in Thailand. We’ll also discuss best practices for staying safe with all of the different species we will be interacting with, and staff will always be on hand to further instruct students regarding safe interactions with animals.

You will have the opportunity to touch, feed, and get plenty of up close photos with elephants, but it is important to also allow the elephants to have the freedom to enjoy their natural environment and the company of their elephant friends. It can be even more rewarding to watch the elephants interacting with their natural environment from a distance because this is when their true personalities shine!

Students will always be accompanied by staff who will instruct students in how to safely interact with the elephants.

None of these books are required reading. You can purchase any of the books on our suggested reading lists at the links below.* 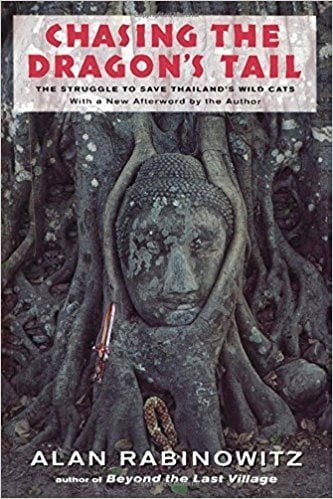 Chasing the Dragon’s Tail: The Struggle to Save Thailand’s Wild Cats, by Alan Rabinowitz. Alan Rabinowitz is one of the leading authors on protecting large cats in the wild. He is the director of the Science and Exploration Program at the Wildlife Conservation Society, and has led research expeditions all over the world. He is known for founding the world’s first jaguar reserve, which lies in Belize. This book is a sad and beautiful tale of the author’s struggle to understand Thailand and to help save the wild cat population of Thailand. 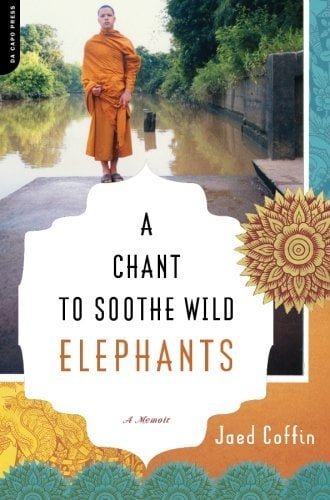 A Chant to Soothe Wild Elephants, by Jaed Coffin. Jaed Coffin lives in Maine, and was raised in the United States as a Thai American. When he was twenty-one-years-old, he left college life in New England to be ordained as a Buddhist Monk in his mother’s native village of Panomsarakram, Thailand. This book is the story of his time in Thailand, and explores themes of displacement, ethnic identity, and cultural belonging. (NOTE: this book isn’t about elephants.)

When Elephants Weep: The Emotional Lives of Animals, by Jeffrey Moussaieff Masson and Susan McCarthy. This New York Times Bestseller was heralded as “A masterpiece, the most comprehensive and compelling argument for animal sensibility…”. Elephants are the national animal of Thailand, and are an important symbol in religion and culture there. They are also intelligent, social animals who are on the brink of extinction in Asia and Africa. This text is a great exploration of the emotional lives of elephants and an eye-opening tale for students of conservation and the behavior of animals, human or otherwise. 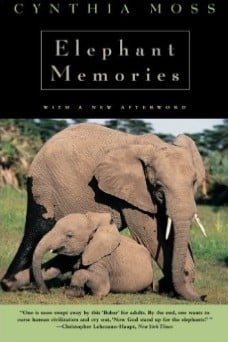 Elephant Memories, by Cynthia Moss. Cynthia Moss is founder and director of the Amboseli Elephant Research Project in Africa. As a study of a family of African Elephants in Kenya over twenty-seven years, this book is a moving and important book. “One is soon swept away by this ‘Babar’ for adults. By the end, one wants to curse human civilization and cry out, ‘Now God stand up for the elephants!’”, wrote Christopher Lehmann-Haupt of the New York Times. 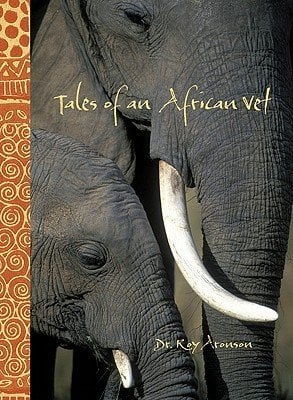 Tales of an African Vet, by Dr. Roy Aronson Booklist says, “For a veterinarian, it’s one thing when one’s patients are cuddly pet cats, dogs, and the occasional hamster. It’s quite another when the cats turn out to be cheetahs, the dogs are part wolf, and the hamster? Well, that could be anything from a gorilla to an elephant, a puff adder to a crocodile. Through equal parts luck, timing, and desire, Aronson augmented his 25-plus-year career as a small animal veterinarian in South Africa with house calls to treat some of the world’s largest and most dangerous creatures. Except that in Aronson’s case, the “house” was anywhere from a rhino’s cage at the renowned Pretoria Zoo to a lion’s pride in the densest African bush. The case histories of the animals treated in these treacherous locations provide an exhilarating glimpse into the lives of numerous valuable and endangered species. As intrepid as Indiana Jones and as compassionate as Dr. Doolittle, Aronson shares harrowing, and sometimes humorous, adventures in an engrossing memoir about an unexpected career.”

The Elephant Whisperer: My Life with the Herd in the African Wild, by Lawrence Anthony Publisher’s Weekly says, “In 1998, prize-winning conservationist Anthony (Babylon’s Ark: The Incredible Wartime Rescue of the Baghdad Zoo) purchased Thula Thula, “5,000 acres of pristine bush in the heart of Zululand, South Africa,” transforming a rundown hunters’ camp (dating to the 19th century) into a wild animal preserve and a center for eco-tourism. In 1999, Anthony agreed to take in a herd of “troubled” wild elephants, the first seen in the area in more than a century. Winning their trust, becoming deeply attached, and even learning how they communicate (deep, rumbling “whispers,” sensed rather than heard), Anthony took enormous risks in the form of enraged elephants, distrustful neighbors, and poachers. Over time Anthony succeeds in his larger goal, winning support from the six Zulu tribes whose land borders the reserve (“most Zulus … had never set eyes on an elephant”); they eventually join Anthony’s venture as partners in a larger conservation trust. An inspiring, multifaceted account, Anthony’s book offers fascinating insights into the lives of wild elephants in the broader context of Zulu culture in post-Apartheid South Africa.” 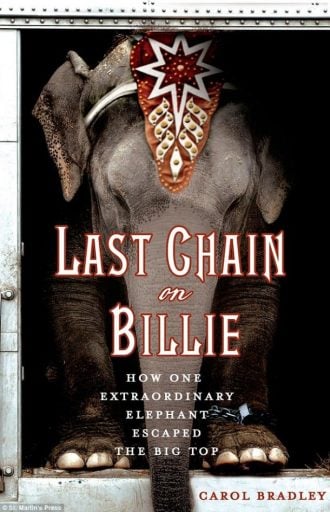 Last Chain on Billie: How one Extraordinary Elephant Escaped the Big Top, by Carol Bradley ” Like the majority of captive elephants, Billie was captured as a calf, surfacing in the U.S. in 1966 as a four-year-old. After several years in a private zoo, she joined the circus, where she was trained to perform. Circuses are an extremely demanding environment for elephants, with constant travel from one town to another, multiple shows per week, and continuous noise. Although she learned difficult tricks and was a star, Billie rebelled and began to be known as a difficult elephant, gaining a reputation for attacking her trainers. Meanwhile, two former elephant trainers had grown disenchanted with circuses and the distorted lives that circus elephants lived, and they decided to found a sanctuary for former performing elephants in Tennessee. The story of how Billie got to the Elephant Sanctuary, and of how the sanctuary overcame the prejudices of both the circus and zoo communities, is both heartrending and uplifting. Full of details of the brutal life endured by performing elephants, of battles between Billie’s owner and the U.S. Department of Agriculture over her ultimate fate, and of Billie’s eventual adjustment to a life of freedom, Bradley’s newest has produced a well-researched winner.” – Booklist

*Links are affiliate links – thanks for helping to support Loop Abroad!

"As a vet student, I was looking for a completely unique experience before starting clinics. Loop Abroad and the experience at ENP exceeded my expectations and provided both a medical and cultural experience that can't be found anywhere else."